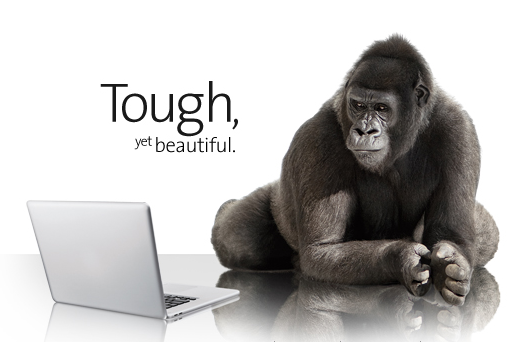 Among a string of mostly ho-hum product announcements at this year’s International Consumer Electronics Show in Las Vegas earlier this month, one component vendor’s news attracted a good deal of attention. At CES, Corning Incorporated(NYSE: GLW) introduced Corning Gorilla Glass 2, an update to its popular cover glass for consumer electronic devices. The success of Corning’s product, first introduced in 2007, is reflected in its wide adoption by hardware manufacturers.  Today it is the most widely deployed cover glass, used by more than 30 major brands and designed into more than 575 product models, spanning more than 500 million units worldwide, according to Corning.

But Gorilla Glass is more than a business success–it is one of the company’s fastest growing businesses, expected to reach more than $700 million in 2011 sales, nearly triple 2010 results. It is a clear marketing success. The brand has emerged as a familiar name in its own right, a la “Intel Inside.”

That’s not bad for a product that almost didn’t see the light of day. As the story goes, the basic formula for what is now Gorrila Glass was created by Corning in the 1960s but couldn’t find a market. That is, until Apple CEO Steve Jobs came calling in 2007 to talk to Corning Glass CEO Wendell Weeks about a non-plastic screen cover for his original iPhone.

As related in “Steve Jobs,” the biography on Apple’s chief executive written by Walter Isaacson, Jobs convinced Weeks to manufacture the glass by saying, “Don’t be afraid, you can do it.” Weeks eventually converted a Kentucky factory making LCD screens into a Gorilla Glass plant, Corning’s first.

On the branding side, Corning’s push to make Gorilla Glass a household name began with the launch of the “Tough, yet beautiful” campaign by ad agency Doremus.  The campaign, launched in tandem with Corning’s first appearance at CES last year, had ads featuring–what else?–a gorilla using high-tech products as part of his day: a cellphone, tablets, HDTVs and refrigerators sporting TV panels.

In July,  Doremus’s work was celebrated by the Business Marketing Association, which presented the agency with four B2 Awards of Excellence. Corning also plays up the brand with a dedicated Web site: http://www.corninggorillaglass.com

According to Corning, Gorilla Glass 2 enables up to a 20 percent reduction in thickness with the same strength and scratch resistence, according to Corning, which said the new formulation will permit thinner, lighter cell phones, tablets and laptops in the coming months, not to mention giant, touch-screen TVs now in development. Corning also said the new glass permits “brighter images, and greater touch sensitivity.”