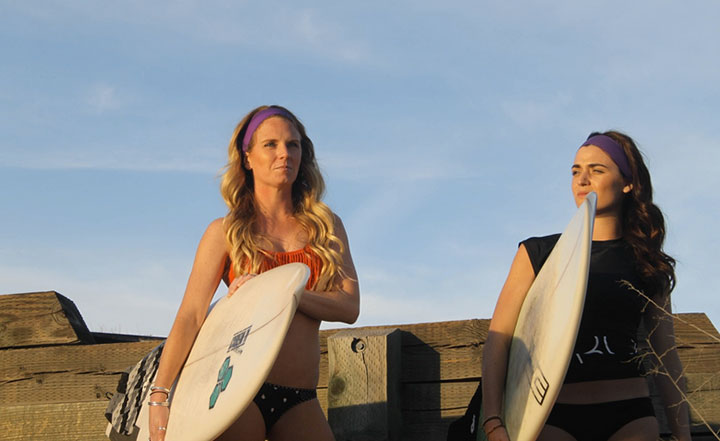 There’s a chick named Diana Klochkova and another chick named Ashley Reta. They met in the summer of 2013, and quickly bonded over their love of anything having to do with the water. Both swimmers, water polo players, and scuba divers, they could also connect on a common problem faced by female athletes: their hair was always falling in their face.

“It might not sound like a big problem, but it’s enough to kill a dive with a leaky mask or to become dangerous when you’re paddling through a rapid and need to be able to see what’s ahead,” says Klochkova. “I wasn’t about to put on a swim cap to keep my hair back, because I’d look absolutely ridiculous, but clips and hair ties just weren’t cutting it.”

Thus, the idea for “The Bang Wrangler” – which is not as sexy as most pandas might hope – was born. So the savvy Klochkova, who leads social media at Levi’s, has teamed up with Reta to launch a Kickstarter that will ideally fund the creation of the first batch of silicone headbands that stay in place in the water but don’t pull on hair.

“I loved Diana’s idea, and I knew Kickstarter was going to be the right way to rally other women around this product,” says Reta, who resides in Shanghai – which is not in America – and has led the effort to source the product and create its visual identity.

“We were both absolutely shocked when we learned that only 25 percent of Kickstarter project backers are women, and I’m willing to bet an even smaller portion of project creators are female,” says Klochkova, who hates the panda use of the term “chick.” “This platform is such a great way to launch a small business, and women need to start taking advantage of it as a resource. If we succeed in getting to our goal, we hope we can inspire more ladies with great ideas to follow in our footsteps.”

Just one week into the project, it’s well on its way to being fully funded with more than 100 backers contributing to generate more than $3,000 in pledges, making the pair only $2,000 shy of their goal.

The Bang Wrangler Kickstarter campaign runs through Tuesday, March 25th. Various levels of rewards are available, including bulk packages of 10 Bang Wranglers and “Wrangle Those Bangs” t-shirts. Reta and Klochkova have also announced that other colors of Bang Wranglers, in addition to turquoise, will be made available if they surpass the $5,000 mark.

So boo-freaking-hoo all you want, give a couple of chicks props for their entrepreneurial effort to crowdfund what they believe to be a need amongst a specific demographic.