Checking in on the Chicago Lean Startup Challenge

A few weeks ago we wrote about the kick-off of the Chicago Lean Start-up Challenge. 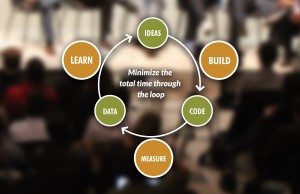 By following the 5 principles of the lean start-up methodology, teams will be able to go from idea to minimum viable product during the course of the challenge. Here is an update one month into the challenge.

The original goal was to have 100 teams participate and that goal was blown away with 146 teams ultimately signing up to compete. The following are the key dates for whittling down the field of 146:

I followed up with one of the organizers, Bernhard Kappe, on the progress made to date. The organizers had hoped to raise over $100,000 in cash and prizes that could be awarded to the winner and possibly the second or third place finishers. While they are still raising prize money, the full $75,000 in cash and prizes are currently still slated to be awarded to the winner of the challenge. All of the teams participating benefit from some of the free services including:

The organizers hosted about 60 members of the Challenge teams at the first mixer and have a second one planned with a date TBD closer to the November 17 semi-finalist announcement.

We all know that most entrepreneurs are eager to talk about their trials and their successes and are usually open to helping out other start-up folks. This has been evident with the Lean Start-up Challenge. Kappe has been please by the level of interaction and mentoring among the different challenge teams in addition to guidance from the coaches. The challenge teams are using Posterous Spaces to document their experiments, progress and learning. The intent was for Posterous Spaces to be the medium for teams to receive feedback from the coaches and judges, but it has morphed into a virtual support community according to Kappe. There have typically been five to ten posts daily from different teams that receive anywhere from 20 to 30 comments, from not only the mentors, but the competing teams as well.

I think this is a great testament to Chicago start-ups; they are really coming together as a community and see a common benefit from working together and sharing knowledge. Tech.Li will keep you posted on progress as we get closer to November 17, so check back for updates.