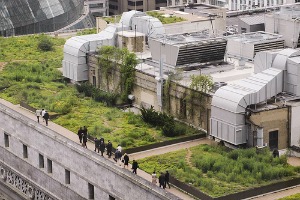 Hot off the heels of President Obama’s State of the Union pledge to get 80% of America’s energy from clean energy sources by 2035, it’s important that the Chicago entrepreneurial and tech scene understands its role as a leader for the green movement. Although former Mayor Daley received most of the headlines for Chicago’s green reputation, our local government, real estate developers and businesses have a history of dedication to enabling sustainability initiatives, and a slew of startups have emerged to continue this legacy.

Chicago now has the highest number of LEED (Leadership in Energy and Environmental Design) certified buildings in the United States at 124. LEED buildings are scored by the U.S. Green Building Council based on factors such as water conservation, use of energy-saving building systems, utilization of renewable energy sources, proximity to public transportation and indoor environmental quality. Some of our LEED buildings include the Chicago Center for Green Technology, the Chicago Botanic Garden’s Daniel F. and Ada L. Rice Plant Conservation Science Center, and the Haworth Chicago Showroom.

Since 2004, all Chicago municipal buildings have been constructed to meet LEED standards, and Chicago’s Sustainable Development Policy mandates that any project receiving financial or zoning assistance from the city include building in green, sustainable elements or receiving full LEED certification. LEED building may get even bigger in Chicago if Rahm Emanuel is elected as mayor. Emanuel has been campaigning for green design as the Chief of Staff for President Obama, pushing for Chicago’s Calumet Environmental Center (a LEED Platinum building) in order to highlight the environmental importance of the Calumet wetlands.

The USGBC hosted its largest annual the event – GreenBuild International Conference & Expo – at Chicago’s McCormick Place back in November, 2010. More than 25,000 people from across the globe attended the festivities, which were kicked off by a jovial keynote from retired Gen. Colin Powell followed by a rousing debate moderated by political pundits Mary Matalin and James Carville. The Expo floor was a marvel of 1,800+ meticulously constructed and grandiose booths that even the most eager attendee could barely canvass in three days. All aspects of the green building industry were well represented by established industry leaders and newcomers alike in a whirlwind of handshaking and buzzing exchanges of information. The conference was a total success, with several bus companies offering tours highlighting Chicago’s green building accomplishments.

Entrepreneurs and established companies alike have access to fantastic local green resources. As boon for continued growth in the Midwest clean tech sector, the Delta Institute “addresses the full range of economic, environmental and social forces shaping the region’s Green Economy — from climate change and natural resource conservation, to corporate sustainability and pollution prevention, to green economic development in disadvantaged communities”, and the Clean Energy Trust “nurtures promising early stage technologies into viable businesses — with the goal of making Illinois and the Midwest a leading center for clean-energy entrepreneurship.” There are also regular networking events, including Green Cocktails and a host of groups on sites like LinkedIn.com and Meetup.com.

No other city that makes it easier to get funding, advice and meaningful industry connections for green technology companies, so it’s no surprise that several exciting enterprises have emerged in a range of different markets.

– Blue Star helps homeowners and businesses use less energy through efficient lighting systems and spend less for it by utilizing clean energy in place of the fossil fuels used by the local utility company.
– Connexiones.com is another prominent lighting retrofit company.
– GreenTechBuyer educates homeowners and real estate pros about green technology options and helps them shop around to make intelligent purchasing decisions.
– PVPower provides solar installers with online tools to configure and purchase all the components needed for a customized solar energy system.
– SoCore Energy is a national leader in commercial rooftop solar solutions.
– Greenwise Lawn Care offers 100% organic lawn care services.
– Energy Results gives homeowners a wealth of tools and advice to reduce energy consumption.
– There’s just too many to mention…which is a good thing.

As a city that’s never shied away from a good fight, it’s worth noting that Philadelphia’s mayor Michael Nutter has challenged Chicago’s throne (no, not the Italian Beef vs Cheesesteak debate) with his ‘Greenworks Philadelphia’ plan that aims to make Philly the greenest city in America by 2015. Los Angeles is making a strong push as well. While environmental progress should be applauded in every city, Chicago’s reputation as the national leader in green building and business has strategic and health advantages that are worth maintaining. Let’s stay on top.

This is a very intriguing blog post. I have owned a business in the wind energy field for over 11 years and it is absolutely amazing how rapid the industry is changing. For most of us this is a absolutely mind-blowing chapter of history so let’s strive to keep up the pace.

Strange this post is totaly irrelevant on the search query I entered in google nonetheless it was listed on the 1st page. – I took a speed reading course and read ‘War and Peace’ in twenty minutes. It involves Russia. – Woody Allen Born 1935

[…] is certainly not the only commercial lighting retrofit company on the block. Actually, several other major players are based here in Chicago too, so I pressed Scott on how his company is different. His reply was â€œAside from our turn-key […]