Home > Blog > With Actors’ Help, Breaking Bad Subreddit Does A Lot Of Good

With Actors’ Help, Breaking Bad Subreddit Does A Lot Of Good

A subreddit for the popular AMC series Breaking Bad has successfully raised more than $2,600 for A Place Called Home, a non-profit charity helping at-risk youth in South Central Los Angeles.

“This is an opportunity to rid yourself of some of that Breaking Bad torrenting guilt, pirates!” wrote one user. 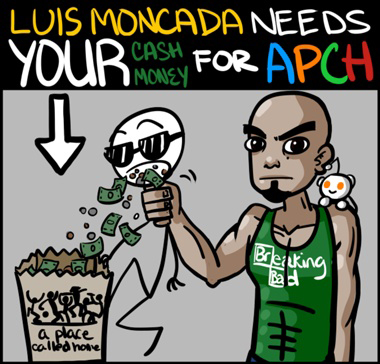 The event, aptly titled “Breaking Good,” featured both Q&A from minor actors on the show, as well as a giveaway of the season 4 DVD set and other reddit swag to donors. The charity was specifically chosen by Luis Moncada, who played one of a pair of twin assassins during the third season of the show.

When he was younger, Moncada was part of the gang world he seeks to educate others about today. The Breaking Bad charity event came about as a response to the actor’s continuing projects to help warn at-risk youth about gang violence.

“I’m so honored to be part of this amazing cause,” Moncada wrote in the thread. “Educating people and helping our kids learn about the reality of gang life has been very dear to my heart for a very long time.”

In addition to acting, Moncada is a motivational speaker for troubled youths, sharing his person story at schools and youth correction facilities.

The fundraising goal was set for $1,000 on crowdfunding service CrowdTilt, and in less than two hours the original goal had been easily surpassed. The fundraising is scheduled to run for the next nineteen days, after which the funds will be turned over to the Los Angeles nonprofit.

“Thank you for all the work you have done for this great cause,” Moncada replied to a moderator of the subreddit. “You’re officially off my hit list.”

To-date, Breaking Bad has won six Emmy Awards, with the show’s lead actor, director, and producer Bryan Cranston securing best actor in a drama series three years in a row. The show will begin the first half of its fifth season of meth-fueled madness on AMC this month.

Will the Future of Mobile Advertising Impact Your Business?

What About Shape Security Has Google So Excited?