Astronomers in constant pursuit of intelligent life in space have a new tool to help them scour the galaxy. An array of more than 44,000 radio antennas across Europe will soon be connected to create a super scanner that will allow scientists to monitor radio frequencies in far reaching galaxies. 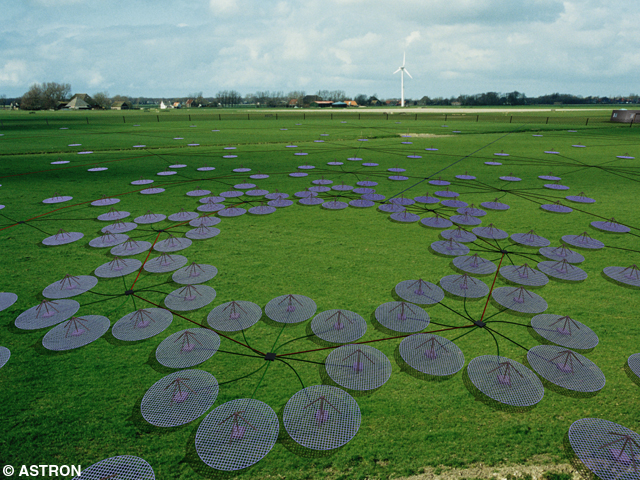 The array consists of 48 banks of antennas throughout France, Sweden, Germany, the Netherlands, and U.K. Each bank is connected to a high-speed internet network, where the data is compiled and analyzed on a centralized supercomputer at the Netherlands Institute for Radio Astronomy. Currently the array focuses on the northern sky, which it will be able to scan entirely in as little as a month and a half.

The Low Frequency Array (LOFAR) utilizes the several antenna banks at its disposal to massively monitor low-frequency radio waves emitted from cold hydrogen gas found in space. These waves can be read over time to monitor galactic changes, possibly allowing scientists to learn more about the expansion and formation of galaxies.

One of the biggest advantages of having such a large array of antennas is that the entire operation is scalable. The project can easily add any bank of antennas from around the world to further its range of vision and data collection, or have different sets working on separate operations simultaneously. Once technology advancements allow, the project could conceivably turn the entire Earth itself into a space exploration antenna.

After initial projects are complete the array will eventually partner with the Search for Extraterrestrial Intelligence (SETI), utilizing the LOFAR’s ability to detect lower frequencies than those the organization has searched for in the past. SETI is a non-profit organization, which currently runs a program that harnesses the processing power of idle member’s computers in order to help power its space monitoring. The service even has a website where you can watch the monitoring process as it happens live – currently SETI is exploring the Kepler Field.

Because LOFAR will be able to pick up extremely low frequencies, the new technology will play a crucial part in the future of space exploration. The new array is expected to be fully connected sometime in the middle of this year.

What Does Pathwright Risk Losing By Differentiating Itself From The LMS Herd?