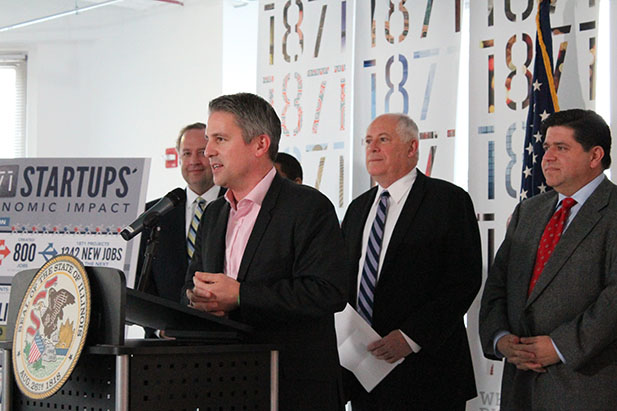 Kevin Willer, CEO of Chicagoland Entrepreneurial Center, celebrates with start-up leaders on the first anniversary of 1871.

“Over the last year, the tech community has really come together through 1871,” said Lindsay Mosher, executive director of the Illinois Technology Partnership.

“This has really been a community effort,” said Kevin Willer, CEO of the Chicagoland Entrepreneurial Center, during a press conference Friday morning to reveal statistics regarding 1871.

Out of the most surprising facts, the following were revealed:

The Chicagoland Entrepreneurial Center projects more than 1,300 jobs to be created within the next year.

Pritzker commended the significant work that entrepreneurs have put into the space. “When we threw up the chance to put together a location, a startup place, a place to really build from scratch what could be great companies, it was the entrepreneurs who came together to decide what this place would look like,” he said.

Mosher said Chicago has a lot of work to do in terms of attracting significant investment and though many feel that Chicago lags behind larger start-up communities such as New York or Silicon Valley, leaders stress that Chicago should define itself on a new rubric.

“I think Chicago is in the process of defining itself as a tech community,” Mosher said, adding that new announcements of Chicago as a biotech center and a dedication to social entrepreneurship are redefining Chicago’s strengths.

“I think we’re going to see some of these young companies grow up and be our next great success stories,” Mosher said.

“I’m excited to see as technology evolves how Chicago really latches on and takes off from there.”

For more on 1871, see video and infographic below: 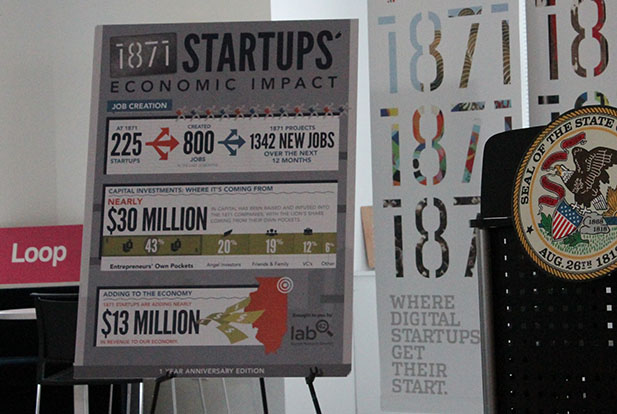