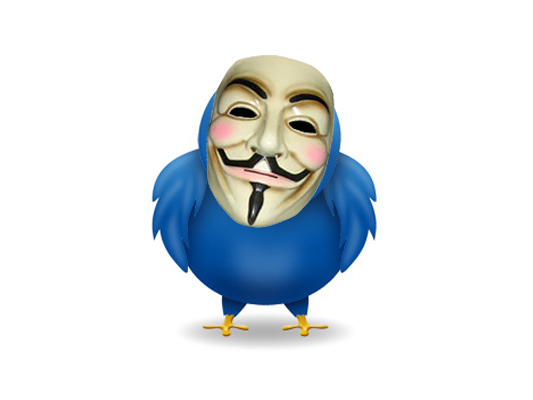 As a community manager, my Twitter account is not just a microphone for my musings, its my business card. I don’t censor myself entirely but do make an effort to stay pretty PC.  Last night, I  found myself more than a little riled up.  After a crazy busy week, my mind was just starting to wrap itself around the reality of SOPA and what it could mean for our country, our world and hell, my livelihood

I thought “Might as well Tweet about my opinion, while I still can” ( under the SOPA Act, if just one user uploads copyrighted material to a social media site, the whole site gets shut down…wave goodbye to Twitter, Stumbleupon, Facebook and more).

Uncharacteristically, I rattled off some tweets expressing my distaste for the MPAA, the entertainment industry as a whole, and several choice Senators. Some of my messages clearly resignated with other upset citizens; while others did not. 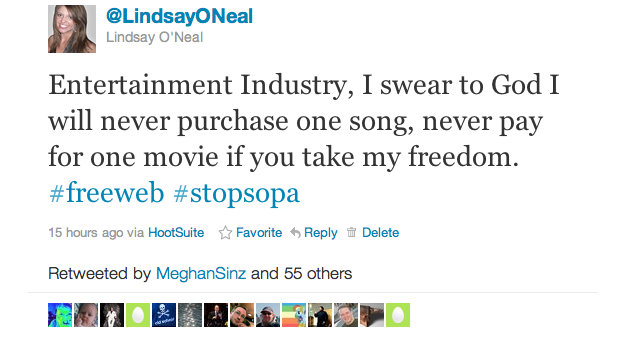 One of my tweets was a link to Anonymous’ Nov. 17th video discussing SOPA. My tweet was not an endorsement of the organization as a whole, but an attempt to share information I found interesting (the point of Twitter). While Anonymous has peaked my curiosity in the past, I have never spent enough time researching the organization (or at least what’s out there to research) to have an educated opinion on their message or tactics.

Shortly after sending that message at at 9:35, I was tweeted a link by @opblackout_ . At first I disregarded the message as spam, but a few minutes later I curiously clicked through to the newly, published Anonymous video which declared “Operation Blackout”.  To my surprise, the video had only 172 views ( currently 10,770 and growing) and had been uploaded only minutes prior to @opblackout_’s tweet to me.

Curious to who was behind the Twitter account, I reviewed @opblackout_’s profile which was created only two days prior: Their first message was:

At the time they tweeted me, @opblackout_ was following 11 users,  had only 4 followers,  only 29 tweets and two direct @mentions  – to myself and @washington post (  @mentions to news outlets like CNN and NBC had been listed at the back of their tweets, but since the @mention was not at the beginning,  its generally not seen as a direct tweet).

In addition to links to the Operation Blackout video, they had tweeted links to pastebin URLS which contained documents of personal information of Senators and Congressman that supported SOPA – home addresses, phone numbers, children names etc.

Frankly weirded out and unsure of who was behind the account, I thanked the user for sharing the video and quickly drafted a post on Tech.li about Anonymous’ warning. Less than an hour later, the post was published, tweeted, stumbled and posted to Facebook and I decided to tweet my whistletweeter the link .

When I pressed send, I found that @opblackout_’s Twitter account had been suspended. And from Topsy, it appeared their last tweet had been the one they sent to me.

No stranger to Twitter, I found this odd.  It usually takes a good while for Twitter to get wind of the misuse of the countless spammers who auto-tweet thousands of people links to their shitty affilate networks for months at a time. So I was suprised to see that a two-day account with an average amounts of tweets had been supsended so quickly.

This morning, I received an answer although not by Twitter.

I have no definitive proof either the new or the old account is officially affiliated with Anonymous. But in addition to my colorful tweets last light, (as of this morning) I am one of only nine users the new account follows so I’m pretty sure I’ve made at least one government list . 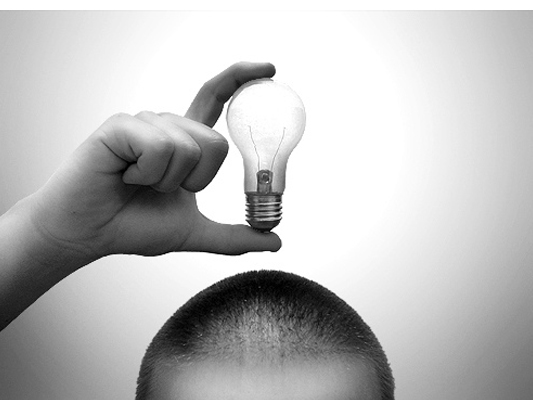