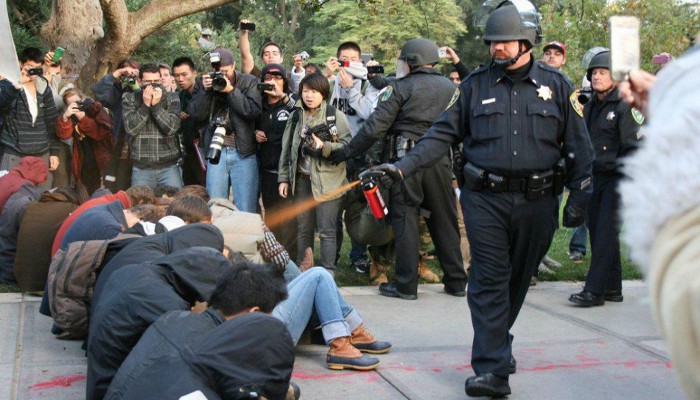 Switchcam, a service that mixes multiple video and audio perspectives that were captured at the same time, rose to prominence by parsing footage from live music performances. While the site still emphasizes concerts, though, the Switchcam team has long planned to branch out into other types of events — including the sometimes-chaotic world of political activism.

Footage of rousing demonstrations (and sometimes police brutality) has, like live shows, exploded with the rise of smart phones and ultra-portable video capture devices. Switchcam co-founder Brett Welch said the strength of the platform lies in filtering signal from noise, potentially opening up contentious events to better scrutiny and analysis.

“By grouping videos contextually I think people will gain a better understanding of what has happened during events of political activism,” he said in an email message.

Some reports have implied that police actions surrounding Occupy Wall Street and associated demonstrations inspired Switchcam, but Welch says that’s inaccurate. A clearer inspiration for the project — which, he pointed out, was launched many months before Occupy Wall Street emerged — was actually the Arab Spring movement, a wave of protests and revolutions that rocked the Middle East and unseated a number of longtime rulers.

“Chris and I saw a broad trend of people recording video of everything interesting and important in their lives, thanks to availability of smartphones and ultra portable cameras,” Welch said. “So we set out to make something useful out of those videos, in particular allowing other people to experience those moments from multiple perspectives.”

In spite of considerable buzz, the San Francisco and Sydney-based startup is still in beta. And the entrepreneurial community clearly sees promise: In June, Mark Cuban led a $1.2 seed funding round for Switchcam that included Turner Media Camp and David Beyer.

Welch and Chris Hartley, both originally from Australia, started Switchcam in early 2011. The initial focus on music, Welch said, was mainly a matter of convenience — it was something there was a lot of on YouTube, and something with which he felt he had a more personal experience.

“We started in music because, frankly, that was the subject matter of most of my own personal videos,” he said. “I go to concerts more than I do protests. So we just started with what we knew.”