Home > Blog > Will Cloud Gaming Be At The Forefront Of Next-Gen Consoles?

Will Cloud Gaming Be At The Forefront Of Next-Gen Consoles?

In the wake of last month’s leaked Microsoft documents detailing potential cloud gaming coming to a post-Xbox 360 console, Sony has purchased a Japanese company that will enable them to deliver high-performance games remotely to virtually any device with an internet connection. Sony agreed to purchase cloud-based gaming service Gaikai over the weekend for $380 million. 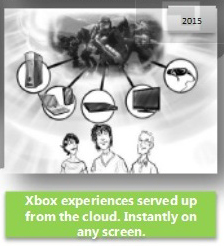 Microsoft’s leaked roadmap for the Xbox 720 referenced a future service coming to Xbox Live that would enable gamers to play their Xbox games on-the-go through tablet and smartphone devices. The document said the new service would rival OnLive, an early cloud gaming service announced in 2009.

Gaikai, a Japanese word that loosely translates to “Open Ocean,” runs servers where a publisher can host its titles for customers to play over an internet connection. Because the game is being run remotely, whatever device is playing the game doesn’t have to have a great deal of processing power.

In essence, the player is watching a video stream of the game being played on a remote machine. The device in front of the player, whether it’s a laptop or smartphone, is only handling receiving the video stream over an internet connection, and sending user inputs back to the remote servers.

I gave Saints Row: The Third a spin on the service, and had little luck keeping the game running on our 5 Mbps connection — about average download bandwidth from most big US internet service providers.

This is by far the largest obstacle that cloud gaming will need to overcome, at least in America. In order for gaming in the cloud to feel fast and responsive, lag between the input location and the cloud servers would have to be minimized largely beyond the capabilities of the average user’s internet connection in the US. This would not only require faster connections, but also a wide range of server centers located in key service areas.

As both companies move toward cloud services it’s likely that we’ll be seeing cloud gaming at the center of the next generation, at least at some point during the lifecycle of Sony and Microsoft’s next big consoles. What we can’t be sure about is if or when the current infrastructure will actually be ready for them.

Is Choremonster Helping Us Raise Little Monsters? A Skeptic’s View

How Non-Programmers Can Get Hired By A Startup