President Barack Obama signed an executive order Thursday designed to make broadband infrastructure cheaper and easier to install, in a move the White House said is intended to spur innovation across regions in the United States. 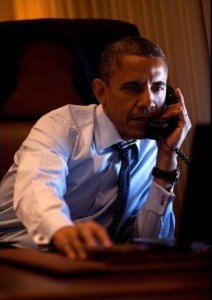 “Building a nationwide broadband network will strengthen our economy and put more Americans back to work,” Obama said. “By connecting every corner of our country to the digital age, we can help our businesses become more competitive, our students become more informed and our citizens become more engaged.”

A number of departments as well as the Postal Service will be required to work together to simplify leasing requirements to broadband carriers. Installations will also be scheduled to coincide with periods of time when streets are already under construction, as a cost-saving measure.

In an election year, the White House has felt increasing pressure to demonstrate that the economy is improving – and to do more to encourage domestic investment at all levels. In addition to encouraging large enterprises to bring previously outsourced jobs back to the U.S., Obama has sought to encourage domestic innovation among small companies and startups.

A related initiative will also seek to improve network speed in areas where broadband is already deployed, in a partial answer to domestic connectivity that pales compared to what’s available in other developed nations. Industry partners in that project include Cisco, Hewlett-Packard, and NEC. The Mott Foundation and the National Science Foundation have also pledged support, including hack days and millions of dollars in broadband technology investment.

The Mitt Romney campaign is working hard to build the former Massachusetts governor’s experience in the business world into a resume that will appeal to voters’ economic concerns. He’s likely to have an uphill battle, though, winning support among tech innovators who are still enamored of the smartphone-toting incumbent – especially because Romney himself does not come across as technologically savvy.

“I don’t know how many people have these iPhones, or iPads, the apps on those things, I mean the applications,” Romney reportedly said in December.