How to Launch a Web App in 3 Minutes with Bloc 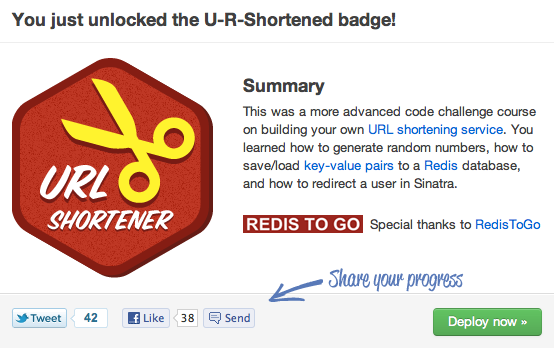 A badge from the programming education startup Bloc.

Choxi, a former Groupon employee, and Tame, founder of GraffitiGeo and author of Startups Open Sourced, got interested in the education space a few months ago when they built OfficeHours.tv.

“We started working together on OfficeHours.tv, which let you bid for one-on-one time with experts like Brian Chesky and Eric Ries. It wasn’t a good value proposition for those guys though,” said Choxi. The team went on to build the peer-to-peer education platform Niroka, but had a hard time gaining traction in the space.

Around the same time, websites like TryRuby.org and startups like Treehouse and CodeCademy launched. After evaluating these products, Tame and Choxi thought they could do better.

“Interactive consoles like TryRuby.org came along where you could actually play around with a language through your browser, although in a very limited way,” said Choxi. “CodeCademy extended that to Javascript tutorials, and at the end of the day you learned a bit of Javascript but couldn’t do anything with it.”

So Bloc teaches you how to program in the browser, but what makes it so different from CodeCademy?

“With Bloc we can actually teach you how to build apps,” said Choxi. “We walk you through how to build web applications, we have feedback loops on how you’re doing,  and we use ‘challenges’ to test your knowledge. And when you’re all done, we have a sandbox for you to go and build whatever web app you want, and then instantly deploy it to the web. You can do this all through your browser at your own pace and with no setup at all.” 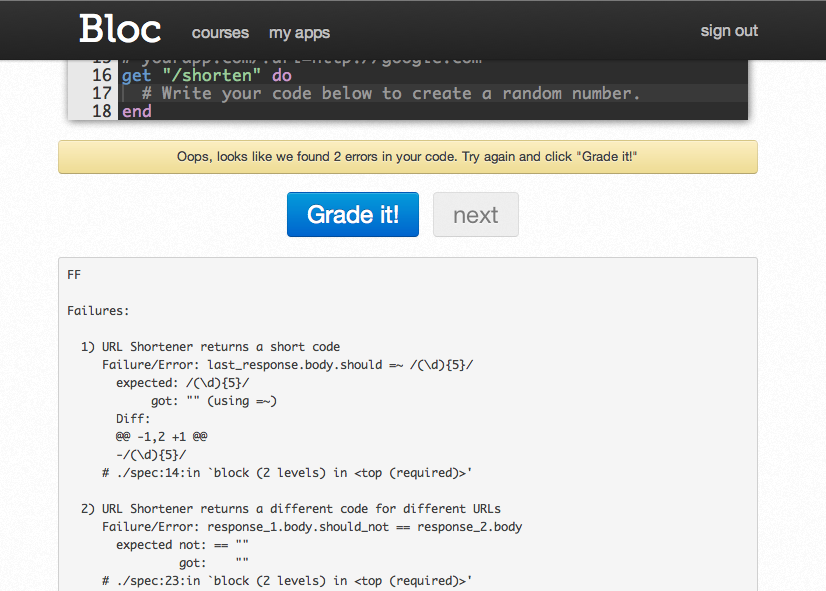 Looks like someone screwed up. It’s okay though, you can run this as many time as you want.

As a programmer, the fact that you can do all this from the comfort of Firefox or Chrome is incredible. It typically takes 30 minutes or more to setup a work environment from scratch, and these guys can create one in under a minute. There is some heavy duty tech going on behind the scenes. And while I – a super techie – love Block for its technical complexity, beginners love it for a complete solution to the problem that is their first app.

“To newbies, it’s a sight of pure relief being able to learn and toy around with programming online in a guided, sandboxed environment without having to worry about all the minutiae of development setup,” said Choxi.

Bloc is definitely not another “me too” programming education startup. Their sandboxed environment looks to do what comes as a challenge to CodeCademy, keep users coming back for more. Check out Bloc here and build an app – many of you for the first time.