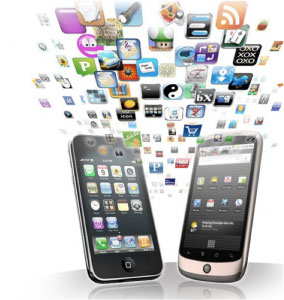 “At 6 p.m. we’re putting down our phones and picking up our tablets.” The words of visionary Howard Tullman, director of Tribeca Flashpoint Academy, a Chicago-based digital media arts college, embedded themselves in the folds of my brain and have not left me since. Perhaps it’s just the timing, but I could not help but connect his recent presentation at TechWeek 2012 in Chicago to a Kakuesque futuristic ploy, a brief glimpse into the once-fabled augmented reality world we are quickly creating.

Science popularizer and quantum physicist Michio Kaku projected in his book Physics of the Future a near future where shirts talk and interact with you, vehicles resuscitate their owners, and we live in a new hybrid communication platform nested in the physical and in the virtual. In this realm, real objects live alongside virtual ones, and the “social” qualities fostered in the “real” world (talking face to face, picking up an object) gain no more importance than the “mocial” layer nested in augmented reality.

How do we even begin to describe “mocial” to our grandparents? Could we ever really expound it? A mix of mobile + local + social, the term encompasses universal human concepts (“social,” “local,” the like) with vastly different connotations than their historical predecessors. Defined and coined in 2010 as “accessing of social applications on the cellphone or other mobile devices,” the term, to me, seems to lately take a new turn that extends beyond texting or using social media.

In this new reality, that hot Airwalk shoe you’ve lusted after will virtually appear in a pedestrian crossing so you can buy it on the spot. The sports stadium experience will become a fully-interactive, “mocialized” one, and you will get to instantly call out bad referee decisions on your phone. Your shirt will actually talk and interact with you, perhaps even scold you for spilling coffee on it.

In this new social realm, celebrities will take a backseat to people with the largest megaphones on the Internet. Why? Because today we have the power to finally quantify status, that age-old purveyor of power. “Today, we can measure, confer, publish, and share our status,” says Tullman. “When the world knows that you are #99 on a 100 count friend list, this matters.” Where will this virtual caste system lead, and will it piggyback on rapidly developing augmented reality technology? Of course it will. It already does.

We’re living in a time when status is a question of BAS (“Best Available Screen”) and 40 percent of phone users multitask with other mobile devices. With the world increasingly operating on these two different planes of reality, our actions in one rapidly affect our views in the other.

Teens commit suicide over malevolent and viral text smear campaigns, their e-status tarnished. And with the Google Goggle in the works, we may soon enter a new age of virtual prejudice, where a mere glimpse at a stranger’ virtual status will give us all we need to hate them before we even say “hello.”

Darkened, sun-tanned skin was a sign of low status in the medieval ages, an indication of our ancestors toiling their days in backbreaking agricultural field work. Today, the average American farmer is a 57-year-old man. The average Farmville farmer is a 43 year-old-woman, and our social exchange amounts to trading virtual pigs and setting up e-chicken coops. We reap what we sow, and who is to say that e-soil, measured in bitcoins, is any less valuable than the arable kind? Try explaining that one to the caveman.

Super Retro Squad: A Kickstarter For Lovers Of Classic Nintendo

Why Startups Won’t Let You Out Of Their Database