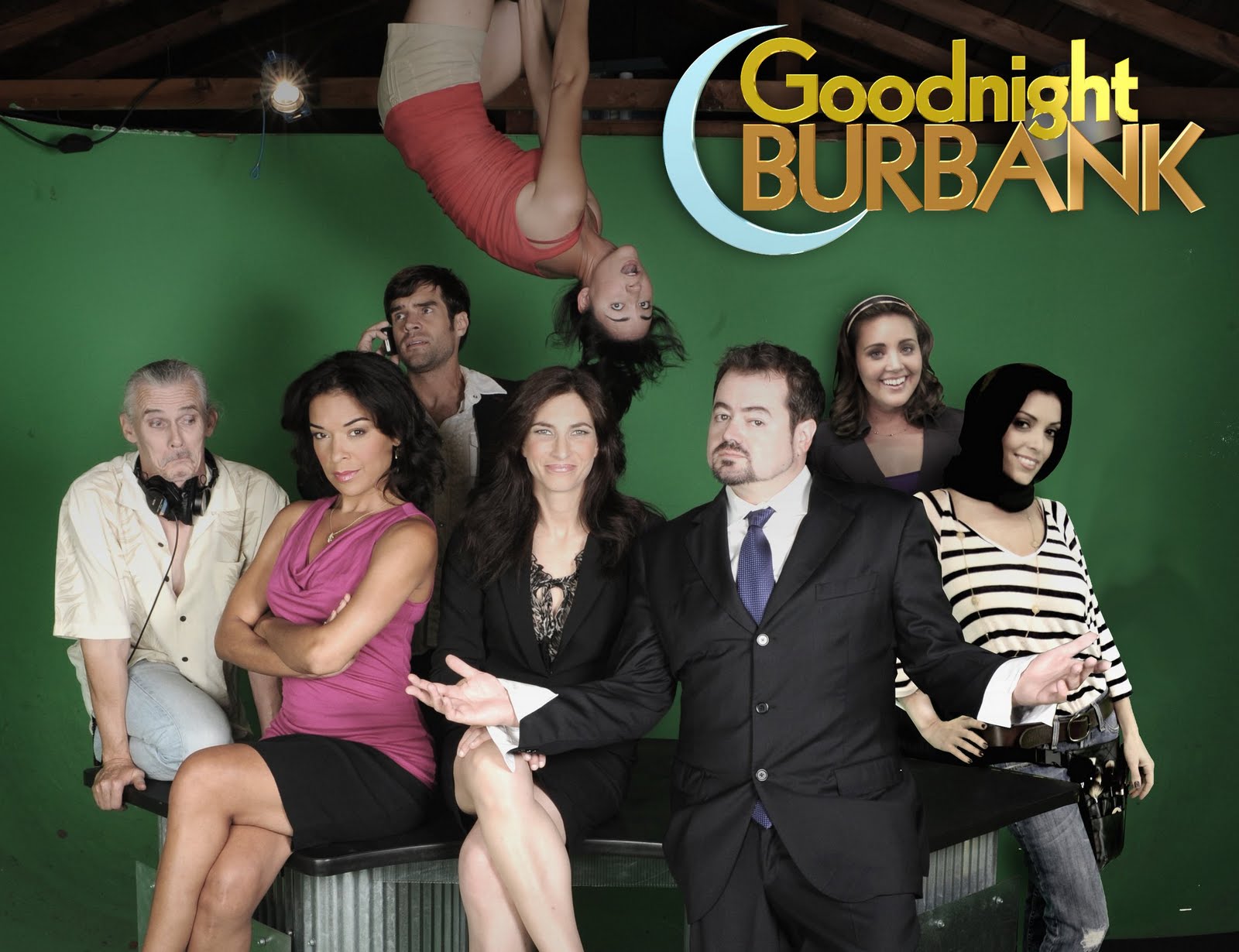 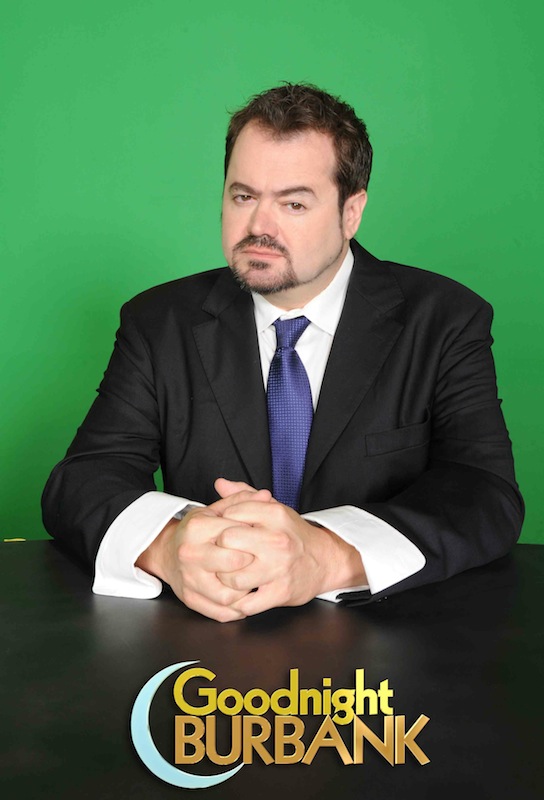 Having recently made the decision to cut the cord on my cable box, I’ve been searching for other forms of entertainment online. Lucky for me, I’ve discovered one of Los Angeles’ best kept secrets: Goodnight Burbank, the first ever half-hour scripted comedy made for the web. A show that mixes social media, technology and real news? Where do I sign up?!

Goodnight Burbank made its web series debut in 2006. After taking home a Vloggie for Best Web News Series and being named a 2007 an Official Honoree by the Webbys, GNB has returned to our computer screens with a new cast and a new home on Hulu.com.

With names like Hayden Black, Laura Silverman, and Dominic Monaghan topping the bill, Goodnight Burbank offers a comical look at the people who bring us our nightly news. Featuring a fictional Burbank news team, GNB combines real news and a behind-the-scenes look at what anchors talk about off mic.

Official nerd moment: Buffy fans will be geeked to know that Camden Toy, notorious for playing some of the show’s creepiest villains, is also a GNB regular. Toy has played one of the Gentlemen in “Hush,” the skin-eating demon Gnarl, and the recurring role of The Ubervamp. Well played Mr. Toy. The Gentlemen still give me the heebie-jeebies.

Recently I had the opportunity to chat with Hayden Black, who, in addition to co-anchoring the newscast, also writes for the web series.

1. How did you come up with the idea for Goodnight Burbank?
I was in Fort Lauderdale watching my parents watch the news. My mom especially was in a sort of quiet awe watching these newscasters and treated everything they said like gold. I realized that this is why, for example, we were led to war in Iraq; because these news anchors are viewed as “special” and almost super-human by the vast majority of folks who watch them. But they’re human. And they have foibles. And they have agendas. And I wanted to do a comedy that punctured that vast bubble. Why should they come into our living room every night and scare the shit out of us! I’ll tell you, if some of Goodnight Burbank’s viewers walk away and watch the real news and wonder who these people actually are – well, my job is done!

2. I see that you’re on Twitter and Facebook. How big of a role do you think social media has played in GNB’s success?
I think that it helps to have these platforms insomuch as they help you with grassroots marketing but I don’t think it’s as simple as just having a Twitter and/or a Facebook page. Each of these platforms must be value-added for the consumer otherwise they become tools to just shout at people with. So our @goodniteburbank twitter delivers 3-4 brand new jokes ripped from the headlines every single day (headlines/punchlines). And our Facebook page is asking for your opinions, it’s offering caption competitions, etc etc – so they all add to the greater whole.

4. Who would you like to have guest star on a future episode of GNB?
Oh, gosh, there’s so many people. We’re talking to a few now for Season 2 which is thrilling. It’s so cool that so many stars are watching the show and saying that they’d like to come play with us!

5. I saw a tweet about a GNB iPhone/iPad app. Can you tell use anything about it?
The app – which will be free – will be available for iPhone, iPad and Android. Every evening you’ll be able to download 3 of the best headlines from that day’s twitter account only they’ll be audio/video. You’ll be able to share them with friends, save the bestest to your drive, and, of course, shop in the store where you’ll be able to get not just the episodes but deleted scenes, outtakes, ringtones and more. It’s going to be a lot of work writing/recording the 3 jokes each day but there you go.

6. Do you think you’ll expand to other cities?
We’ve signed a deal with Zodiac (the 3rd largest independent production company in the world) and they’re repping the global TV format rights. So in time I hope we’ll be expanding on a country-by-country basis, not simply city-by-city!

7. What is your favorite 80’s band?
I love the 80’s like no other so this is very difficult. It would be a five-way tie between Tears For Fears, Soft Cell, the Human League, Duran Duran and the Pet Shop Boys. I could keep on going. 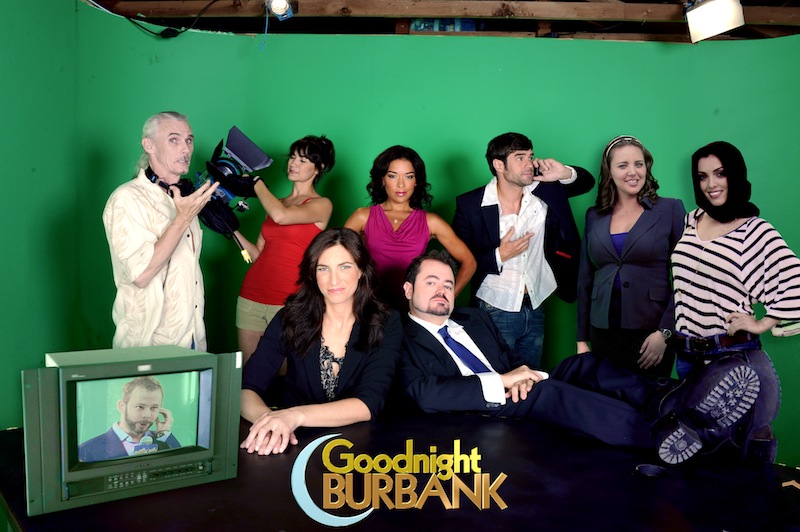 While season 1 has just come to a close, Hayden is hoping to go into production on season 2 later this year. “I’ve already begun the process of outlining 6 scripts. You can expect to see me build on what we’ve done and create some new insanity along with a few great new characters too!”

But just because the cameras aren’t rolling doesn’t mean the jokes have stopped coming. Keep up with the Goodnight Burbank crew on Twitter. And if you’re looking for updates on season 2 or just want some sweet 80’s band recommendations, follow Hayden at @haydenblack.

On The Tragedy of Google