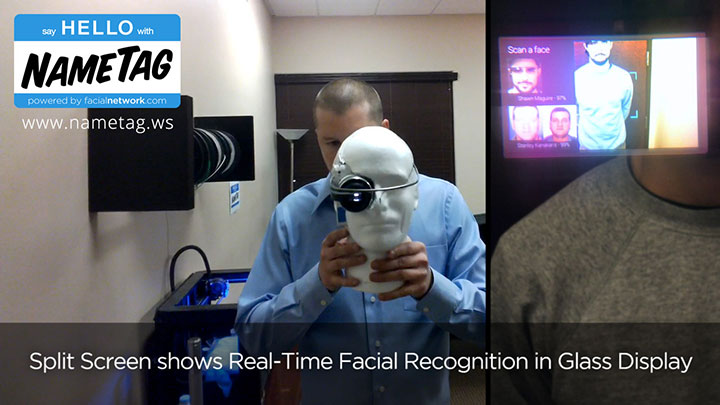 Facial recognition apps have gotten a lot of attention lately. Many question the wisdom of unlimited databases connecting names and faces. Google’s statement opposing this technology (which has now disappeared) doesn’t matter.  A mobile device is just a small computer. An app is just software. People who want these programs will get them. NameTag hardly seems discouraged. And while many articles mention Google Glass, this issue touches all devices, not just the futuristic headset.

Until recently, individuals chose if and when to introduce themselves. Our faces, as well as names, defaulted to anonymity. Of course, celebrities lost this control long ago. Now, so has anyone with a photo on a website.

Technology (like people) has power for good and evil. This tool could assist disaster relief, refugee reunification programs, remembering names and finding that mysterious doppelganger. But what are the risks? When is aggregated open source information dangerous to the general public? Facial recognition software needs attention in the areas of advertising, government, crime prevention, hiring processes and legislation.

Predatory Advertising
In addition to alerting stores to potential shoplifters, there is the possibility of manipulating customers. In theory, stores could monitor the emotional state of their customers and send them tailored ads to persuade them to part with more money. Is there a mother worried about her sick child at Target? What about the man who just got laid off?  Clerks could pounce with the impulse buys.

Abuse by Governments and Law Enforcement
Facial recognition offers clear benefits to law enforcement. But imagine getting pulled over for speeding. The cop politely says, “Please give me your license, registration and pose for our facial recognition database.” According to FaceFirst, a leader in the field, it’s already happening in San Diego (though not necessarily in traffic stops). At least for now, it seems similar to fingerprinting. They’re looking for people already in their records. But what happens to the fresh scan? Does it become a part of the collection? And unlike fingerprinting, facial recognition software does not require physical participation. It can work only from photos.

Outside of the U.S., dictators could use this software to suppress human rights. Facial recognition apps make it easier for governments to scan crowds and melt away anonymity, matching protestors to online profiles. Last year, the Huffington Post reported this account of an Iranian blogger tortured to death for his Facebook login.

Enhanced Stalking
This issue seems to be scaring people most, but it’s missing the big picture. Stalkers use an array of low and high tech tools (almost all legal). To single out one gadget is dangerous because all information empowers stalkers. It makes more sense to focus on the human behavior behind the crime and devices. Like a corrupt government, a stalker will use whatever technique brings him closer to his victim. 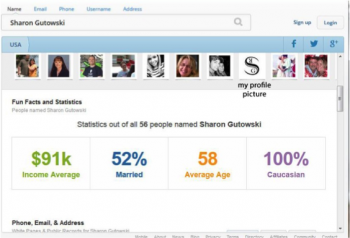 Many states (including Missouri) have programs that allow stalking victims to keep their address private. But as digital footprints expand, that gets harder to do. Out of curiosity, I googled myself. My address popped up quickly, as did images of myself and others. According to these results, my name owes me some serious income. It’s hard to say if the inaccuracy of open source information makes it more or less safe.

Notice the photos: my decision to not use a real photo on my Facebook profile was successful, at least in this case.

More Invasive Job Interviews
I predict facial recognition apps falling in step with cumbersome hiring processes, despite no guarantee of accuracy. Even if the program offers a match to an individual with high certainty, how will anyone be able to trust the data? What if an applicant shares a name with a criminal? Clearly, I’m in good company, but not everyone’s name is so lucrative. I’m looking for a job myself, and it’s hard to see this technology benefitting the applicant.  Who knows? Maybe I should freelance until then and use my high-earning name as part of the salary negotiations.

A Delay in Legislation
It’s no surprise that legislation lags behind technology. Our toys evolve so fast, it’s not realistic to expect comprehensive laws in real time, as if our legal system came with an update button. What rights do children have regarding big data and facial recognition? What role will facial recognition play in seas of data flowing into governments and other organizations? Do people have the right to keep their face private?

What do you think? Is this upcoming trend like using a phone book or like the collection and compilation of DNA?

[…] Check out my article about facial recognition software. […]

[…] Five Issues Of Facial Recognition Software The cop politely says, “Please give me your license, registration and pose for our facial recognition database.” According to FaceFirst, a leader in the field, it's already happening in San Diego (though not necessarily in traffic stops). At least for … Read more on Techli […]