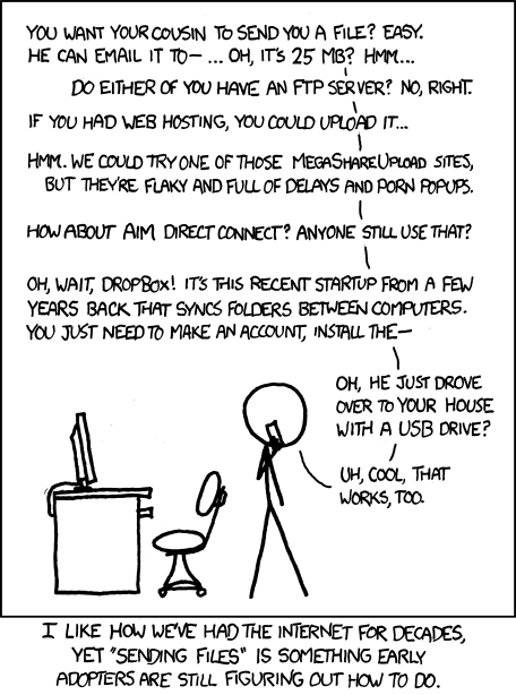 The mechanics of transferring a file via removable media–sometimes called the sneakernet–have remained largely unchanged since the early days of personal computing. A host of cloud-era gadgets, though, advertise ways to move your files without, well, getting off the couch–some quite cool, others seemingly offering solutions to problems that never really existed.

A simple tool is one of the best.

Early generations of online file lockers like Mediafire and Rapidshare were clunky, filled with ads and associated with copyright piracy. And while they were certainly usable to transfer big files (please encrypt, though) it was still probably faster to walk downstairs.

Newer lockers, though, greatly improved the ease-of-use with tidy client integration and intuitive synchronization. Dropbox is free for up to 2GB, with modestly priced options beyond that, and Ubuntu One, which is now packaged with standard Ubuntu installs, provides 5GB and a subscription service similar to Dropbox. The synchronization model is also useful as a limited backup service.

Hardware has been a more mixed scene.

The iTwin, for example, looks like a thumb drive, but it splits in half, with a USB connection on either side. Stick a half in two computers, and it encrypts a connection between the two over the internet.

There’s no denying the elegance of the concept, but at its root the $87 iTwin doesn’t offer much functionality you can’t get for free with Dropbox–you’re still limited by the speed of your internet connection, and there are already encryption solutions for file lockers. If anything, the iTwin introduces two physical pieces that are easy to lose to a problem that can easily be solved with software–a useful trick, maybe, to teach elderly family members about file transfer, but what are the odds that the completely un-tech-savvy are going to need to regularly move big files around?

A more practical hardware solution, at least for devices with no native wireless connectivity, may be the Eye-Fi, a wireless memory card for digital cameras. The Eye-Fi stores photos like a normal memory card, but downloads photos to your computer when it comes into range of an approved wireless network.

It’s a cool idea, especially in light of the perennial aggravation of managing large numbers of photos, and it has geotagging capabilities. And unlike the iTwin, it arguably actually does something.

Finally, tiny “any screen” computers like the upcoming Cotton Candy or the currently-available Raspberry Pi promise a cloud-based data future where you can stick a thumb drive or credit card-sized computer into any display or normal-sized computer’s USB port and run a full operating system install. It’s an especially interesting concept, and one with the potential to add depth to the sneakernet using portable computing to connect cloud-enabled devices.

A PC The Size Of A USB Stick