Can Students Be ‘Safer’ On College Campuses? TapShield Thinks so

I’ve attended a few Universities, starting my freshman year at a small college in Tennessee to transferring to the downtown campus of IUPUI in Indianapolis to earning my master’s degree on the campus of SIUE. All three of these campuses were vastly different, and after hearing a few stories of violence on campuses these days, I might be lucky that I escaped without any incidents.

That’s not to say that I always felt safe. Even today, if I’m out walking (or running in many cases), I am vigilant about taking notice of my surroundings. But, is that enough?

As a student at IUPUI, I took a lot of night classes. Typically, I’d go there straight from softball practice, meaning my return trip home was made with a bat in my hands. I figured that alone made me relatively safe. Though, my vigilance didn’t stop there. Even carrying in groceries for the week, I always made one trip. What if someone was waiting for me to return in the parking lot? Never mind that I couldn’t defend myself on the trip in carrying so many groceries…

Thankfully technology today offers students better ways to ensure their safety. While staying vigilant is still a must, there are great apps that can help you with that, like tech startup TapShield. It was founded by University of Florida graduate Jordan Johnson. 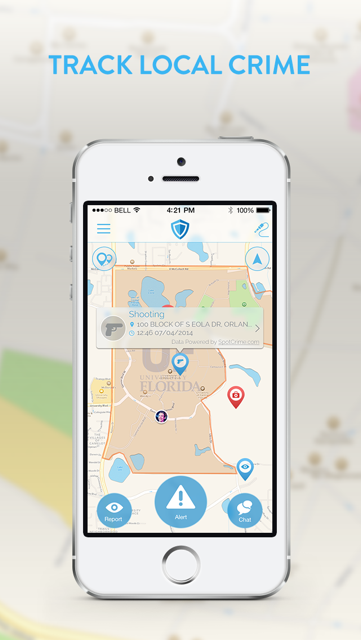 When he was in school in 2009, local gangs were victimizing students walking home. “They were beating these guys up for new member entry into the gang,” said Johnson. “I had just won an election to become student body president. I had all these ideas that I wanted to get done for students, but we had something more important, student safety.”

Johnson had ideas for tackling this issue, but the school wasn’t quite ready to embrace a technology-based solution.

“iPhones were just coming up, and I remember being in a meeting with the head honchos on campus saying we can probably use this to summon help one day. I was holding up my Blackberry at the time, and everyone laughed at me,” Johnson shared. “We left the meeting agreeing to build more blue-light emergency phones and increase police officers on campus. Neither of those two things fixed the problem.”

After Johnson graduated, he spent a couple of miserable years in corporate America before ultimately going back to finish what he started. While increased campus police is great, he knew there was a better way. That’s when he started TapShield, a personal security app that crowdsources safety.

“It’s very well known, it takes anywhere from 2-3 minutes to articulate the situation or awareness of the situation with police,” said Johnson. “Who are you? What do you look like? Instead of taking 2-3 minutes, we can get all this info to police in less than 5 seconds. We’re reducing time for dispatchers to take action.”

When a University offers TapShield, students are able to provide this information through the application on their phone. Campus police has a dashboard, meaning the information is sent to the dispatcher when help is summoned, including your GPS location. Their studies show students can receive help 47% faster than traditional means via 911 or blue-light emergency phones.

That’s not all Tapshield can do, either, and it’s not just for college students. Anyone can use the application. One of its coolest features is their Yank technology.   If you’re out running and need to call for help, all you have to do is yank your headphones out of your phone. Once activated, your phone will alert authorities.

It also allows you to view local crime and alerts, send your walking or running route to your friends, and even report crime.  With the rise in importance of addressing sexual assaults taking place on campus, having access to an application like TapShield could make a big difference with this problem.  (Though disputed, a study has shown 1 in 5 women is sexually assaulted in college. View the White House Fact Sheet here.)

“TapShield encourages information sharing to deter and prevent crime in a way that resonates with today’s student demographic,” explained Johnson. “We know students won’t call their parents, but they will text. It’s fast and it’s easy. TapShield makes reporting a crime just as easy and fast.”

TapShield is available to Universities and corporations. Their initial customer was Johnson’s alma mater, the University of Florida, and they remain their largest customer. “We went back to those guys and after about a year long competitive bid process, we came away awarded the contract to bring it to their 50,000 students, staff and faculty. They love us there,” Johnson said.

When viewing this application for what it is, it’s a great supplemental application for personal safety, but there are still questions. As you can imagine, this type of information sharing and the level of tracking will always bring up privacy concerns and issues. But, Johnson and his team took that into consideration when designing the application. “This was one of the biggest issues with our first corporate customer,” he shared. “Information that’s stored about the user lives on the device. It’s not shared or stored. It’s only transmitted to our dashboard if they need to summon help. They can even submit crime tips anonymously if they want.”

So what do you think? Would you consider downloading an application like TapShield for your personal safety? What about if your company utilized this system? Would you see this as a benefit? 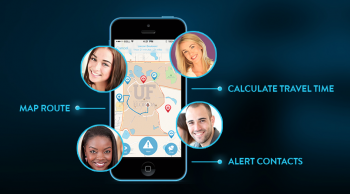 There are other questions, too, that come from using something outside of 911 to connect with authorities, and please note that this is not a replacement for 911. While it’s a great personal safety app, and I like several of its features like Entourage and Yank, you’re still using a service to connect to 911 instead of calling directly.  In an emergency, always dial 911.

TapShield isn’t providing 911, which means they don’t have to meet certain requirements from the FCC like cell phone providers do.  They’re connecting to the service, not providing it.  There is also a bit of a learning curve to using its service. (I’m not sure I’d want to explain how to use this app to my mom.) What happens if you turn off your GPS for the application and don’t know it? Less savvy smartphone users making assumptions could pose a problem.  That’s why their service is primarily targeted for college students, who are quite adept at utilizing their phones and a service like TapShield to its fullest potential.

Take a closer look, and let us know your thoughts on this personal safety application in the comments. It’s available on both iOS and Android.

Editor’s Note: In addition, texting to 911 is not widely available, and even though many metropolitans have this capability it’s typically discouraged. Plus, it’s up to the carrier whether they want to provide this service. (Several do, but not all.) TapShield only allows “chat” if you’re connected to an enterprise using its dashboard.