This week Altaeros Energies announced it has successfully tested a new airborne wind turbine. The turbine can climb to altitudes of 1,000 feet, capturing wind at speeds five times stronger than those found at standard wind turbine heights. 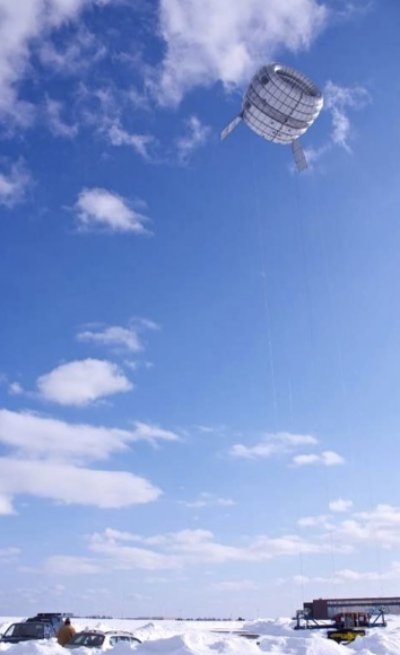 In a press release the company described how the green technology was inspired by aerostats – a precursor to modern blimps that achieve altitude solely from lighter-than-air lifting gases. The airborne wind turbine is about 35 feet across and uses helium to gain altitude, transporting the generated power to the ground below through the sturdy cables that hold it in place.

By harnessing much stronger high-altitude winds the new technology reduces energy costs by up to 65 percent. The biggest improvement of Altaeros Energies’ Aerial Wind Turbine is that it is completely portable, unlike stationary turbines.

During its test in Maine, the turbine was deployed from a trailer. The press release points out that this ease of deployment changes installation time from weeks to days. The turbine’s mobility most importantly allows it to be used at remote construction sites or during mobile military operations where power may not be readily available.

This new wind turbine aims to have virtually no environmental impact, and can be left to work automatically with little maintenance, raising or lowering itself when needed. One of the biggest advantages of airborne turbines is that they can be easily grouped through their ground cabling, and in general take up far less real estate than their larger tower counterparts.

In the future Alteros Energies hopes to scale their airborne turbine to harness even stronger offshore winds. Offshore wind turbines of any kind of been slow to develop in the U.S., with the first planned prototype to be constructed off the coast of Virginia by the end of 2013.

Altaeros Energies was founded in 2010 by MIT and Harvard alumni. Last year the company received a grant from the U.S. Department of Agriculture, as well as the ConocoPhillips Prize for “forg[ing] new paths to a cleaner, greener and more secure energy supply.” The company is currently looking for partners to make the airborne turbine commercially available.

Nielsen: Smartphones Poised To Take Half Of Market