Adventures in Airtime: What Seven Strangers Think of the Service

Napster co-founders Sean Parker and Shawn Fanning met in a chatroom when they were teenage hackers. Together, they changed the way consumers thought about sharing music by throwing the first punch that led to a decade-long fight with the music industry. Now, the two have reunited to create Airtime, with the goal of changing the way that consumers watch and share video together.

Airtime officially launched Tuesday. While the startup community was eager to try out the new service, many people who remember the launch of the video chat service Chatroulette weren’t so excited. Chatroulette, a service that matched callers with random video chatters, was plagued with trolls and nudity from the beginning. The site soon became the go-to media example held up as “the dark side” of the internet.

I had to check out Airtime to see if it solved the major issues that killed the popularity of Chatroulette. I decided to call up seven random strangers on Airtime to evaluate the creep factor. Here’s what happened:

Lebovitz is involved in the New York City technology scene. He was cloaked in a hoodie, but he came out of the shadows once he saw that I was a girl. He noted that there were many men on the site and few women. Once you connect with a caller, Airtime displays all of the information that callers have in common, including friends and interests. Airtime authorizes information about a user from their Facebook account. The name and location of callers remain anonymous, until a user clicks “accept” to exchange information.

Lebovitz noted that we had the New York Tech Meetup in common, and we chatted about how hard it is to get tickets to the crowded monthly event held at New York University. He gave me a brief lesson in how to use virtual assistants to get tickets for me, and I definitely will be using his advice.

Just when I thought that Airtime could be a great way to meet interesting people in my local startup community, I was connected with a guy that I will call “The Bearded Dancer.” He was sitting in a room that contained a few stuffed animals, and he was a skinny guy with a goatee and floppy blonde hair. Instead of talking, he started making goofy faces. At first I thought that he couldn’t hear me, so I kept greeting him like I was in a bad Verizon Wireless commercial.

Yep, he could hear me. Then he got up and started dancing. Next!

Orley is the co-founder of a new menswear line, Orley, that is slated to launch later this year. As we started chatting, we discovered that both of our significant others were also nearby but off camera. After all, this video chat thing is still a little weird until it becomes the new normal. After a few minutes of chatting, we all admitted that we have had more interesting conversations with people than we have with creeps on Airtime so far. Orley said that he also chatted with the guy who became famous yesterday for chatting with Mark Zuckerberg.

Orley sent me the link to the clothing line, and I told him that my husband is shopping for a new look. Not only does he have a new potential customer, but I’ll be sure to let my fashion-forward guy friends know about his line. My video chat with Orley got me thinking about how video chat could potentially be used for customer service and marketing. It would be easy to connect with a target market based on interests and demographic.

We connected as friends on Facebook after the chat.

Call 4: I Got Rickrolled

A man in his mid-twenties connected with me. He was wearing a button-up shirt and he was sitting in an office with framed diplomas on the back wall.

Suddenly, that familiar rickroll tune started playing, and his video faded into the background as the music video started blaring. 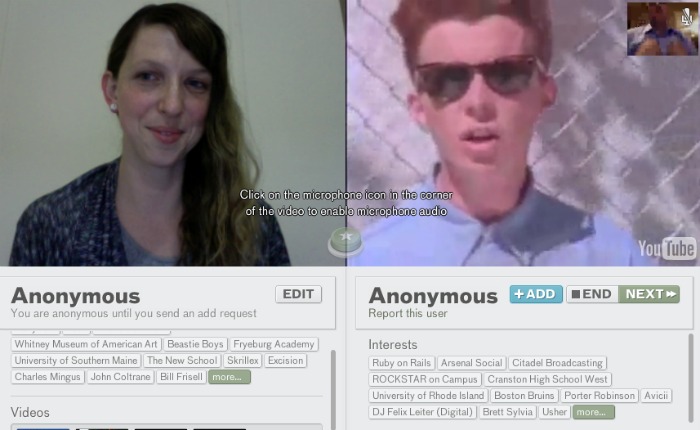 You can see that I was trying to mask my confusion with an awkward smile. Should I hang up? Move on? What kind of dance is he doing?

I decided to test out a feature that makes Airtime different from Chatroulette: the ability to discover who an anonymous person is based on interests. I noticed that the rickroller was interested in Ruby on Rails, Arsenal Social, and the University of Rhode Island. I googled Arsenal Social and discovered that the founder, C.J. Bordeleau, went to the University of Rhode Island. It was him.

Beware the anonymous setting on Airtime. It’s surprisingly easy to figure out who you are talking to.

So far, I had only been searching for people to talk to in New York City. I decided to expand my search to find people globally. I connected with Asher Hunt, the new head of product and design at Santa Monica-based Look.io – a real-time support plug-in for mobile apps. Hunt and I talked for a few minutes about Look.io, as well at the startup scene in New York City. He asked me for a few coworking recommendations for the next time that he is in New York. We also connected as Facebook friends.

Just as I reached my goal of talking with five people for the night, I decided to make two more calls. Orley mentioned that he heard that Sean Parker might be taking calls, so I had to continue on to see if our paths would cross.

I immediately noticed that Barrett and I had a shared friend: Lindsay Morton, the CMO of Techli, and a shared Facebook like: this website. At first I didn’t know how to start a conversation because we both had not yet revealed our names and locations to each other.

Barrett broke the ice: “I think I’ve been emailing you.”

Barrett connected with me earlier in the week about the folks at Digital Telepathy for a story I am working on about SlideDeck2. We had a long conversation about our experiences so far on Airtime, and we both agreed that the weeks following the launch may be the best time for technology fans and members of the startup community to check it out. The likelihood that users will run into early adopters who are working at startups is high now, but will probably diminish soon.

“We will all become too busy to hang around and use Airtime,” Barrett noted.

Suddenly, the Rick Roll song started playing again and the sound on my side cut out. Barrett and I disconnected, and when he called me back, it continued to play. We agreed that it must be a launch day bug, although I can’t confirm that right now.

“Maybe Airtime rickrolls you when you talk too long?” Barrett offered. The music was messing with my head, so we agreed to end the call.

A tiny head peeked from the side of the screen pointed toward a bookcase.

“Hello, welcome to Airtime!” I said enthusiastically. I was too excited and too friendly. The caller thought that I was a customer representative for Airtime.

“No, no, I am just a caller. I’m writing an article for a technology blog in the United States . . . ” It didn’t help that my back was to a white wall in my living room that I staged on purpose. Before I embarked down the rabbit hole of Airtime, I had no idea what would potentially happen. I didn’t want people to see into my home.

After a few awkward exchanges that included me showing the caller around the Airtime user interface, I discovered that he was a frequent user of Chatroulette, but this was his first call on Airtime. It was 6 AM in Tel Aviv.

I told him that I was initially apprehensive to try out Airtime because of the “creep factor”. We talked for more than thirty minutes about the nature of human communication,  how Facebook and Twitter may be contributing to people’s lack of interest in listening and preference for broadcasting, and the evolution of friendships built both on and off the web.

“But isn’t everyone a creep?” he asked.

“No, I’m definitely not a creep,” I retorted.

“But do you look at the Facebook profiles of people that you went to high school with just to see what happened to them? If you do, you’re a creep”.

The positive connections that I made far outweighed the weirdness of The Bearded Dancer and The Rick Roller. I went into this experiment hoping to avoid the dark side of the internet, and ended my journey hours later being called a creep by a person on the other side of the world that I will never see again. As a perfect bookend to the story, the anonymus caller told me a story about Sean Parker as we were wrapping up.

“I used to visit the same chatrooms that Sean Parker did. In fact, that’s how I learned English. I wanted to follow along with what the hackers were doing.”

Have you tried Airtime yet? What happened? What did you think?